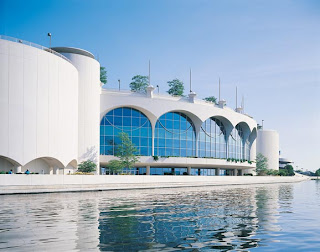 The 2008 The Psychoneuroimmunology Research Society (PNIRS) annual conference took place between May 28-31, 2008 at the Monona Terrace Convention Center, adjacent to the University of Wisconsin campus in Madison.

The theme of the meeting was “Promoting Innovation in PsychoNeuroImmunology: From Cytokines to Society.” The meeting was hosted by primate vivisector Chris Coe, director of the infamous and still controversial Harlow Primate Psychology Lab.

1:30 - 3:30 PRESIDENTIAL SYMPOSIUM: Neural Mediation of the Effects of Stress and Psychological Factors on the Endocrine and Immune Systems

Dr. Richard Davidson Keynote Speaker Interactions between the brain and the periphery in the regulation and dysregulation of emotion, Univ. of Wisconsin, Madison, WI

The point of the study was to find out whether chronic administration of interferon-alpha caused depression, as it was already known to do to mice, since at least 2000 [Yamano M, Yuki H, Yasuda S, Miyata K. Corticotropin-releasing hormone receptors mediate consensus interferon-alpha YM643-induced depression-like behavior in mice.J Pharmacol Exp Ther. 2000], to rats, since at least 2001 [Sammut S, Goodall G, Muscat R.Acute interferon-alpha administration modulates sucrose consumption in the rat. Psychoneuroendocrinology. 2001], and to humans, since at least 1984 [Adams F, Quesada JR, Gutterman JU. Neuropsychiatric manifestations of human leukocyte interferon therapy in patients with cancer. JAMA. 1984.]

You can almost feel the authors’ giddy excitement at the discovery that, like mice, rats, and humans, rhesus monkeys also become depressed upon chronic administration of interferon-alpha: 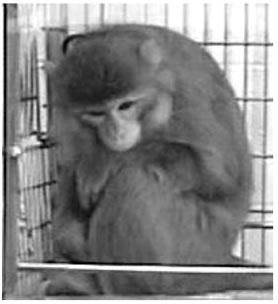 As Miller finished up his lecture and the NIH Funding Opportunities Round Table was just getting underway, a few of the attendees wandered over to look out over beautiful Lake Monona and forget for just a moment the ugly reality of their or their colleagues’ chosen careers and the horror of the animals’ lives and pains being detailed in the graphs and posters at the convention. But, alas, the calming view was marred by the presence of terrorists and a possible aquatic assault... 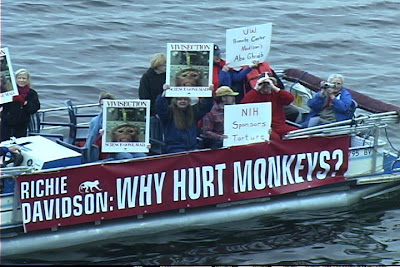 Clandestine reports from within the conference center informed the activists that the little ship had disturbed the assurance of the conference attendees and that they were trying mightily to ignore the disruption, but like moths to a flame they came skulking over one or two at a time, sometimes in threes and fours to steal glances at actual public opinion of animal experimentation and vivisectors.

As the boat sailed away, it was time for Richie Davidson to begin his keynote address, paying lip service, no doubt, to his kindness—honed by his years of “compassion meditation”—and his personal relationship with the Dalai Lama.
at 7:17 PM

"[...]to steal glances at actual public opinion of animal experimentation and vivisectors."

picture looks great. wish i could have been there

With so many people on earth claiming to profess a belief in a "higher power," one wonders: Who would Jesus/Buddha/Mohammed/the Earth Mother/(name your deity) experiment on? But we not only hope to see an end to primate experimentation in our lifetime, we expect to see it---not just because of this one little boatload of committed and compassionate folks, but because of what we read, see and hear in media, song lyrics, ads, overheard conversations, books, magazines, the internet---in the voice of the collective unconscious all around us. People everywhere are waking up, and we have hope and faith that this particular brand of cruelty will end.