Believe it or not, this isn't from The Onion. 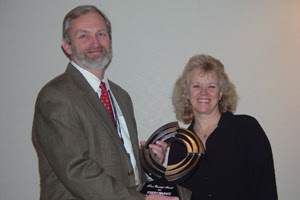 Joseph Kemnitz receives the Knox award from Hannah Carey, Professor of Comparative Bioscience in the UW-School of Veterinary Medicine, and President of WABRE.

The Wisconsin Association for Biomedical Research and Education (WABRE) presented Joe Kemnitz, director of the Wisconsin National Primate Research Center, with the Knox Courage Award January 19 at the Best Western Inntowner Hotel in Madison, WI. The award goes annually to a person in the state whom association members believe has consistently and proudly stood up for promoting the need for critical, humane biomedical research to the media, educators and the public.

A large turnout of Joe’s family, friends and colleagues joined WABRE directors and board members to present the surprise honor.

Knox Courage Award? What the heck?

Joe Kemnitz has repeatedly refused to participate in public debates and discussions about the use of monkeys in biomedical research. I think he's afraid to do so.

In 1999, he hid, literally, with his family inside the primate center when the 1999 Primate Freedom Tour stopped to protest at his lab.

In 2005, he stood behind his young child and peeked out the door at people protesting in front of his house.

The Knox Courage Award? What the heck?

Relatedly, about a year and a half ago, a friend tried to find the Wisconsin Association of Biomedical Research and Education's (WABRE) office. It turned out to be a private residence, and the residents seemed totally freaked out that someone had stopped by. The next day, their website was stripped of all content. This is the entire site as of 9-17-07:

Also, and no less surreal, the award presenter, Hannah Carey, Professor of Comparative Bioscience in the UW-School of Veterinary Medicine, and President of WABRE, isn't involved in biomedical research. Her lab's research is centered on the physiology of hibernating ground squirrels.

I wish she'd spend less time tormenting small animals and more time compiling a list of all the past recipients of the WABRE Knox Courage Award so we could see just what qualities are considered courageous by the vivisectors in Wisconsin.
at 9:08 AM