The USDA has fined Harvard University the equivalent of $6.61 for 11 animal welfare violations at its research labs in Massachusetts between 2011 and 2012.

The violations included the death of four monkeys as well as inadequate training of the people "managing" the animals. That works out to be sixty cents per violation.

This is what the USDA and spokespersons for the vivisection industry mean when they claim that there is rigorous oversight of their industry.

Would you slow down if a speeding ticket cost you a mere sixty cents?

"USDA has resolved its review with an agreement that we feel was appropriate."
-- Harvard spokesperson

What a joke. A sick depraved joke.

Crocodilians use tools for hunting

Using objects as hunting lures is very rare in nature, having been observed in just a handful of species. We report the use of twigs and sticks as bird lures by two crocodilian species. At least one of them uses this method predominantly during the nest-building season of its prey. This is the first known case of a predator not just using objects as lures, but also taking into account the seasonality of prey behavior. It provides a surprising insight into previously unrecognized complexity of archosaurian behavior.

It wasn't so very long ago that we believed that no animals other than white men had souls, minds, or inherent rights. But things change. A woman has just been named CEO of General Motors and on Monday, December 2, 2013, a writ of habeas corpus was filed in a court in New York on behalf of Tommy, a 26-year-old chimpanzee.

To those who take the time to notice, it appears that there are thinking beings all around us, beings with complex minds and interests. Their interests are the subject of increasing concern, discussion, action, and demand.

The fact that there are those among us who are concerned, won't let the conversation fade away, keep advocating for those who have no voice, and keep making demands on their behalf, is very hopeful.

UW Madison's apologist for all terrible things done to animals in the name of money, excuse the slip, science, was miffed by my observation that on many issues the "extreme" view is the only moral one. You can read my original post here, and his confused denial of this plain truth here. He'd rather that people with strong views different from his not speak loudly enough to be heard. I'd be shocked if I didn't know who he was or his history of trying to keep the public in the dark. [Here, here, and for a laugh, here.]

[It's a real knee-slapper to me that he sees himself and his cronies as holding a middle position on hurting animals and that he thinks of himself as someone willing to compromise.]

Unless you live in a cave, you've heard by now at least someone lionizing Nelson Mandela. In fact, even UW Madison professors have joined in.

This must be troubling to the vivisectors who try so hard to use "extremism" as a cudgel to turn the curious away from careful thought about what they do to animals.

Apparently, Sandgren would have argued in 2007, that Mandela ought not be allowed to be part of the public conversation on racial discrimination.

I suspect that more than a few white South Africans would have agreed with him. 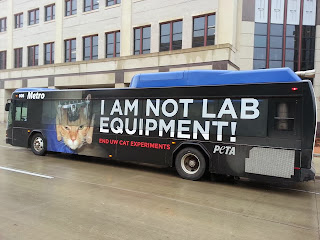 Read more about UW-Madison's spin.
at 2:04 PM No comments: