University of Wisconsin-Madison Chancellor Biddy Martin’s opinions about the use of animals in research are important because it is probably within her power to severely limit or even eliminate much of her university’s animal experimentation. At least until the Board of Regents fired her.

Her defense of animal research in her op-ed in the June 26, 2010Wisconsin State Journal is worth looking at again. I said in my previous post that her comments could be construed to be an abuse of authority given her distortion of the plain facts. In her defense, it might be that she has been misled. It isn’t improbable that someone else drafted much of her letter and that she simply affixed her name to it -- without any genuine consideration and fact checking -- out of easily predictable allegiance to the institution she was hire to lead.

But, given her position as the leader of a purportedly scholarly institution, she seems to have shirked her responsibility to think carefully about the claims that were being made in her name and the utter failure of the op-ed to address the question at hand.

The question at hand is:

Given the fact that Dane County has become the Primate Experimentation Capital of the World, should local elected representatives take a look at the reasons primate experimentation is controversial? 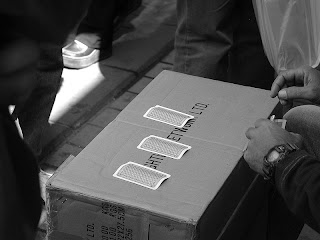 In spite of the specificity of this question, Chancellor Martin’s op-ed relied on a sort of Three Card Monte to deflect attention from the matter at hand. She wrote: "For all of the attention that animal research has had in recent months, including the Dane County Board's consideration of a resolution on the topic,..."

But that’s not the topic of the resolution.

If a student had written Martin’s op-ed, I don’t think they should have received a passing grade. At the very least, honest argument requires one to address the salient points. Martin should have said something along the line of: “It is ethical to experiment on monkeys because they are not as smart as most humans.” Or: “Monkeys have no feelings, so what we do to them doesn’t matter.” Or: "The Bible says we have dominion over all other animals."

Instead, she (or the letter’s author) appealed to benefits that have purportedly resulted from experiments on animals generally. Apparently, looking only at experiments on monkeys, the author was unable to name many; in fact, they didn’t accurately name any, in spite of two specific claims about the use of monkeys: the false claim that Howard Temin’s (co-)discovery of reverse transcriptase was dependent on experiments on monkeys, and the false implicit claim that the university’s embryonic stem cell research using monkeys was in some way associated with the recently announced success in treating injury-induced blindness in humans with adult stem cells from the patients’ own eyes.

Biddy Martin’s op-ed is either a refusal or else an inability to address the issue at hand.

At its core it is both anti-democratic and anti-intellectual. Chancellor Martin argues that the public's elected representatives should not engage in fact-gathering and deliberation about the things happening in their community and then fails to address the issue at hand, believing apparently that the large body of research pointing out the similarities between monkeys’ and humans’ minds and emotions is not worthy of even a moment’s notice.

It appears to be a case of old fashioned bigotry against those who look different, a case of money taking the place of thought, or else, as I mentioned above, a case of one marching in lock-step with one’s institutional comrades, a sort of nationalism on a smaller scale: UW right or wrong.
at 4:46 PM