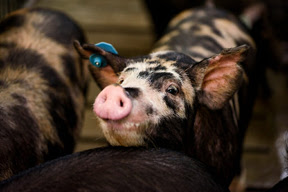 Wisconsin miniature pigs, an image used in both articles mentioned below.

This is a recent PR piece from UW-Madison. If you don't read it very carefully, you will come away with the belief that creating mutant pigs has in some way helped children suffering from a rare genetic disease. But a careful reader will learn that no children have been helped. The article is the same sort hype that has filled newspapers ever since the mid 1930s as a result of the wildly successful fundraising for polio, the first commercialization of medical research. (See Polio: An American Story. David M. Oshinsky. Oxford University Press. 2005.)

The author, a UW-Madison news writer (aka propagandist) is a past mouse vivisector, so it makes some sense she gets giddy about "advances" in the scientific use of animals. In this article she describes symptoms children with neurofibromatosis type 1, or NF1, can experience; she makes no mention of the symptoms in the pigs.

Oddly, perhaps not, a version of the article was published in The Atlantic a week earlier: "Turning Piglets Into Personalized Avatars for Sick Kids." The author was Ed Yong, he also left out any description of the disease in the pigs.

It may be that neither author plagiarized the other. They are after all telling the same story, but the parallels are suggestive, For instance:

Ed Yong: "... Once Mason’s diagnosis was in, [Charles “Chuck” Konsitzke, Mason's father] started asking around about NF-1 research. In particular, he wanted to know where the bottlenecks are. What was the single thing he could do that would most accelerate research into his son’s condition? And the answer that he kept hearing was: Find better animals to experiment on."

Kelly April Tyrrell: "Upon Mason’s diagnosis [Charles “Chuck” Konsitzke, Mason's father] began to delve into published NF1 research. He wanted to know where it was happening, who was doing it and how he might be able to help. He sought opinions from experts, wondering how the field could be improved. Many identified the same bottleneck: the lack of a good research model."

Ed Yong: "When studying diseases, scientists often turn to laboratory animals like mice and zebrafish. They can use these so-called model organisms to work out how mutations cause diseases, and to find and test possible treatments. But the usual lab animals aren’t a good fit for NF-1. They’re too small, and they don’t react in the same way to the mutations that cause the disease in humans. For example, studies in mice suggested that a drug called lovastatin might help to address the learning and attentional problems that accompany NF-1. But when the drug was tested on actual children, in a large clinical trial, it did nothing.

"To better understand NF-1, Konsitzke learned, you need a species that’s closer in both size and biology to a person, and yet is still relatively easy to raise and study. That is, you need pigs. “Pigs closely represent humans,” says Neha Patel, who directs the UW neurofibromatosis clinic. “People with NF-1 have varied cognitive deficits, from severe learning issues to subtle problems. If you imagine studying those in a rat, you’d only get a crude picture of how that translates to humans. But pigs are intellectual animals."

Kelly April Tyrrell: "In biology, research models are animals, cells, plants, microbes and other living things that allow scientists to study biological processes and recreate diseases in order to better understand them. Good models yield information relevant to humans, but the right model can sometimes be difficult to find.

"NF1 is especially complex, affects many systems of the body and touches many areas of scientific inquiry, from cancer research to neurobiology. Chuck began to search for a better model and in 2013, when Mason was 3, he settled on pigs. Pigs are similar to humans in many ways that other common research animals, such as mice and flies, are not. That includes their size, which means drugs and devices that work on humans can also be tested on pigs. They have a robust immune system, which rodents lack. And they’re intelligent, so scientists can study changes to their cognition."

In any case, there at least seem to be some prepared talking points that both authors heard from some of the people they interviewed.

One thing that caught my eye in both articles was the bit about Charles “Chuck” Konsitzke being told that no one was making progress on treating the disease because their was not a good animal model. Ed Yong describes Konsitzke as an "administrator at the University of Wisconsin’s Biotechnology Center." Kelly April Tyrrell is less vague, she notes that he is the associate director of universit’s Biotechnology Center, "a sort of one-stop shop for scientists in need of DNA sequencing, genome editing and other services."

Konsitzke may have gotten a different answer to his questions if he had spoken with someone outside the animal research bubble. The Biotechnology Center he helps direct is deeply involved in promoting and facilitating animal use. His intimate involvement in this part of the university helps explain the talking points repeated in both articles.

A significant difference between The Atlantic and the UW-Madison articles is that the university article implies that individual children's disease will be modeled by a group of pigs with the gene defect from the child, and that the course of the disease in the pigs will inform doctors about the disease course in the children. The Atlantic article quotes the researchers saying that ethical problems might arise if they do do that, so the researchers might blind themselves to the source of the pigs' mutations, which eliminates one potential benefit claimed in the university article.

Missing from both articles was mention of the need for genetic counseling for couples intending to have children. The prudent course would be to forego breeding in cases with a likelihood of producing children with genetic illnesses. I suspect most readers will come away from the articles thinking that making pigs sick is a good thing.

And who knew that UW-Madison has a 1,500-pig research facility? I learn new things every day.