Humane is in the wallets of the beholder

Yoshihiro Kawaoka's influenza research has been much in the news recently.

The university is defending its repeated approval of his experiments. What choice do they have? They have to defend his work because they don't have the gumption to stop it, in spite of the fact that it increases the likelihood of many people being killed.

Their response to the criticism is the normal and predictable behavior of people who operate within well-defined social or political groups when challenged about their behavior. There may be cases that are exceptional, where some large group acknowledges its Groupthink error and fixes things right away, but I'm unable to cite one off the top of my head.

The reason I'm taking the time out to write here at all is to call attention to one specific thing. Kawaoka says that his research is safe. He also says that his use of animals is humane. By understanding what he means by humane, we might get an idea about what he might mean by safe.

The image below is a reproduction of a chart in a recent paper co-authored by Kawaoka. (Sorry about the terrible image quality; Google has done something to Blogger that has resulted in miserable image quality.) 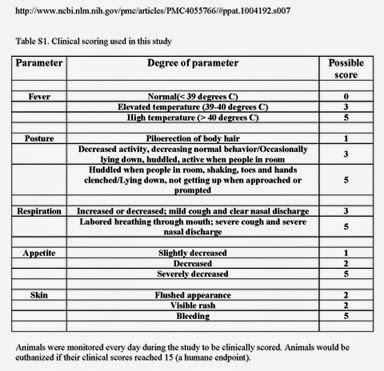