I read an article on Harvard Magazine's "John Harvard's Journal" yesterday, titled "Animal Research Reforms." I think it goes without saying, but I'll say it anyhow, that Harvard is widely perceived as being fairly astute, sophisticated, and attracting smart people. But with regard to the use of animals in its biomedical research endeavor, it seems to be filled with the same low caliber of individuals as pretty much everywhere else.

The article was (I suspect that they'll change it some time or another) kicked off with a photograph of a young baboon. The photograph was captioned "common marmoset." I wrote to them and pointed out the error and suggested that they might want to change it. I recommended a photo of a rhesus macaque since rhesus monkeys are the most commonly consumed species at the NIH National Primate Research Centers. Here's my email correspondence with them:


The mislabeled image is of a young baboon, a species not usually used at the New England primate center. Thought you'd want to know.

(What else don't the editors really understand about the experimental use of nonhuman primates?)

Someone named John S. Rosenberg wrote back right away and said:


If so, and we will research, the image is wrongly labeled from the photo source from which we acquired the image. JSR

To which, I replied:

do the same for young baboon

The most accurate image would be of a rhesus macaque, the overwhelmingly most common primate species used at the primate centers including New England.

It's not a giant deal of course, but I can't help laughing when I see the image and caption still being used by these experts: 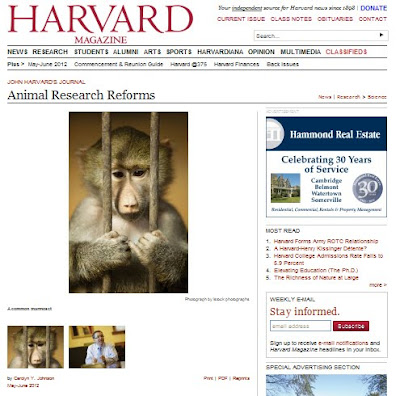 And a little larger for clarity: 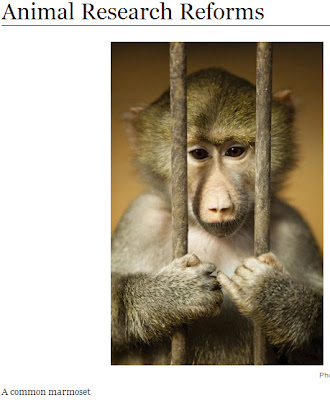