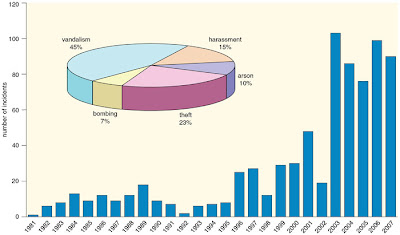 American Scientist is the magazine of Sigma Xi, the Scientific Research Society. The bar graph above, featured in the article "Winners and Losers in the Animal Research War" by P. Michael Conn and James V. Parker in the May-June 2008 issue of the magazine is taken directly from a Foundation for Biomedical Research (FBR) webpage. Here's their graph: 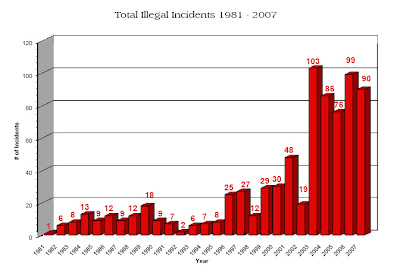 You'll notice that the circle graph or pie chart has been added. It's odd, and since it is unlabeled--do the figures represent all the years or a single year?--and untitled, it wouldn't rate an A or even a B as a middle school student product. We all know that Americans score low on scientific literacy tests; maybe this stems from some illiteracy and stupidity on the part of editors of American science magazines like American Scientist.

Let's look first at the numbers in the circle graph, and then consider the bar graph and what it really means.

The data in the American Scientist come from another FBR webpage (an Excel sheet) here, apparently. According to this sheet (see the Summary sheet), there were a total of 738 animal rights related "incidents" reported from 1981 through 2006 including 511 related to biomedical research, 103 related to food production, 85 related to fur, 27 related to circuses, horse racing, rodeos, and zoos, 45 related to the environment, and 18 other miscellaneous incidents.

But the silliness of bar graph and the article itself completely swamp the poor scholarship of the circle graph.

Let's think about the total number of animal rights related incidents that led to this article being written, its prominent placement in American Scientist (the graph takes up almost a half a page), and its promotion by the editors: 738 incidents in 26 years. The scope of the problem has led to special new laws targeting the people who commit such crimes and creating a special class of people who deserve to have special protection through enhanced penalties for anyone who commits an act or crime that harms or intimidates them or causes damage or economic harm to their place of business or livlihood.

Let's put this in perspective and see if any of it makes an iota of sense.

Notice that vandalism and harassment don't make the list, yet vandalism (317) and harassment (103) account for over half (420) of the total number of animal rights related incidents (738) that are claimed to have warranted the new laws, new class of victims, and prominent articles in science journals.

Apparently, vivisectors think they are more important than the approximately 24,000 convienience store clerks who are robbed every year. Where are the special laws protecting them? Why aren't the science journals pointing out the ludicrous claim that 738 mostly minor incidents over 26 years is vanishingly insignificant when considered against 11,556,854 genuinely serious crimes in a single year?

Graphs like those produced by FBR and reprinted by American Scientist are anti-science and nothing but the most base of propaganda. If placed on the same graph as just the annual violent crime in the US, the animal rights related incidents would be impossible to plot because of their rarity.

Have no doubt, the editors of science journals are well aware that authors can misrepresent scientific data by inventive use of statistics and misleading charts and tables. When they feature one like those that accompanied the article in American Scientist it seems that their intent is to deceive. (Another possibility is that they genuinely believe themselves to be infinately more important than anyone else.)

What's sort of ironically funny is that the editors must think that their scientist readers are either idiots or true believers. It seems clears that they don't consider them critical thinkers.

Of course, one has to divide the number of attacks by the size of the group under attack and compare to the baseline rate. But the basic point is that people are being targeted because of the (legal) work they do.

If one were to follow your twisted logic abortion doctors should not have been granted any additional protections (as killing people is already illegal.)